Free UK delivery on orders over £30

A few weeks ago, I found myself scrolling through my work email at around 9pm. Not my usual style, I must admit, I try my best to keep a bit of distance between my home life and work life. That evening, I found TV and Music were not keeping my attention. I opened my laptop and after some scrolling found myself on my work email, noticing that there had been a few unopened emails that had been skipped over in the build up to preparing to exhibit at the recent CBD trade show in London.

I saw an email titled “Recommendations for good practice by the Medical Cannabis Clinicians Society”. (MCCS) I assumed it would be nothing of significance but read on anyway. I was surprised to find; it was addressed to me personally and the email address looked official with logos in the footer. I read it a second time and had to rub my eyes. I don’t like to paraphrase so please find the full email below 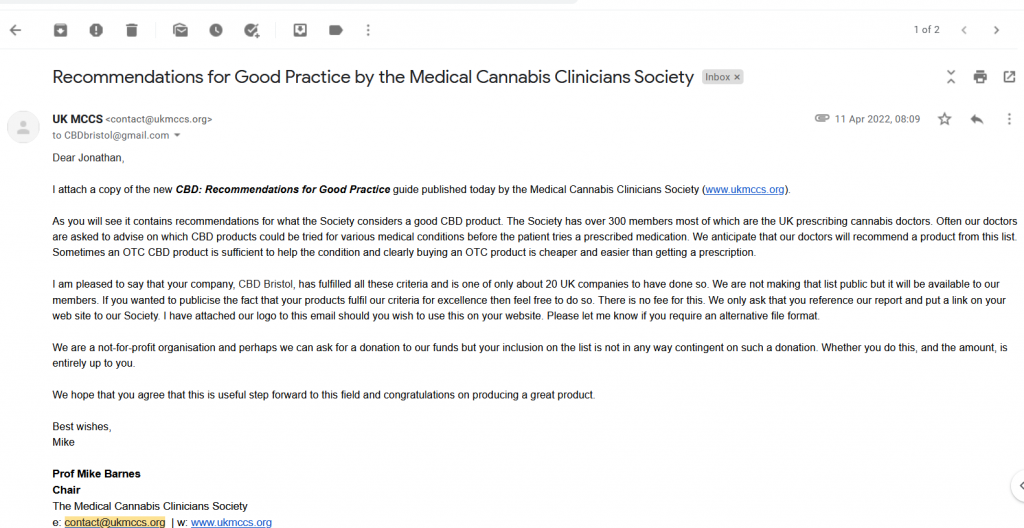 As you can read this is a big deal. My company CBD Bristol had been recognised as a CBD company of good practice because of our correct labelling and quality product by, Professor Mike Barnes who is the biggest advocate of medical cannabis reform within the NHS in Britain. He was the first Doctor in the UK  to describe Cannabis oil to Billy Cadwell (the young boy with Epilepsy who having had his Cannabis oil confiscated on return from Canada in 2018, which eventually led to the then health Secretary, Savid Javid, allowing Cannabis oil to be available on the NHS). Which was a huge U turn for the Conservative party, who have been very anti cannabis reform in Britain for over 30 years.

We had been selected as part of a small select group of 20 CBD companies from the UK that had passed the approval of the folks at the MCCS. What would this recommendation mean for us as a business? I decided to reply to request a phone call to discuss the email’s contents further. I sent it, then closed my laptop and went to bed.

The next day I had a reply from Gillian, Professor Barnes’ associate assistant asking if I was free in 2 weeks to have a zoom call, I agreed. Fast forward two weeks and I am sat in my studio waiting to find out the details of this approved list for medical cannabis describing doctors. The zoom call began, and I was greeted by two faces firstly Gillian and then Professor Barnes. He looked a little scruffy showing some facial stubble and uncombed hair. You would not immediately think that he was a high up consultant neurologist in the NHS, cramped in what looked like a small home office with a Tibetan Mandala poster on the back wall. Seeing this I knew I was in good hands.

We spoke leisurely for half an hour, Professor Barnes explaining the history of the MCCS and how their published recommendation of good practice originated. He explained that due to the CBD market being saturated and a big rise in patients asking their Doctors advice about CBD, the MCCS wanted to create a list of products and companies that was approved for Doctors and Clinicians in their membership to have access to this list, to use when suggesting over the counter CBD products to their patients. He explained that they had looked at three hundred UK based companies and their products with only twenty had passed their criteria for good practice, of which one was us. We also discussed the recent publication of the FSA’s novel food approved list, his involvement with medical Cannabis, his work with Charlotte Cadwell and Professor Nutt, name dropping the who’s who in the small but influential world of Medical Cannabis reform in Britain. I thanked him and Gillian for their time and explaining everything to me. I said it felt like a huge honour to be recognised by the medical cannabis community and by prescribing Doctors. We said our goodbyes and the call was over.

As I sat back in my chair in my empty studio, I felt a slow release of achievement flow through my body. This small business that I had started with £500 and a product recipe and nothing but a lot of gusto and panache to be part of the people bringing back the healing power of cannabinoids back to the twenty-first century through legal legitimate legal channels. To be recognized for creating an honest range of reliable over the counter CBD products for medical professionals to suggest felt incredible.

So here we a few weeks later and we are slowly starting to share this news with the world, and it is still feels incredible.

We are in the MCCS guide for good practise

All our products contain less than 0.01% THC

for 10% off your next order